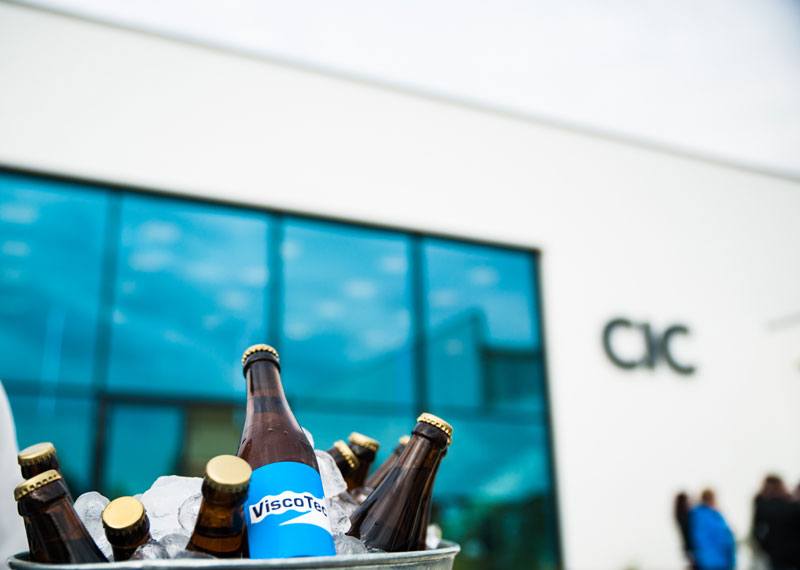 For the invited guests even “ViscoTec Beer” was available.

The atmosphere at the big company anniversary of ViscoTec was exuberant – the employees and their families celebrated together with the closest business partners of the medium-sized company the round birthday and the inauguration of the new building.

Opening of the new building

After a construction period of more than one year, the new ViscoTec building was opened. An impressive Customer & Innovation Center and another spacious assembly hall were built on 3,200 square meters. The show room was also expanded to include urgently needed additional office workstations. „We only moved into our 3,800 square meter company building at the end of 2011.” explains Georg Senftl, Managing Director of ViscoTec. “But because of our strong growth, investment in enlargement was essential.“ 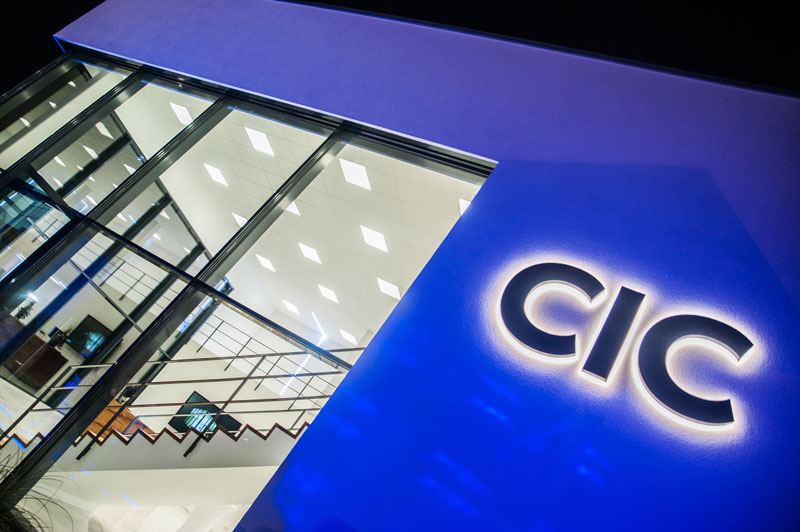 Inauguration of the CIC (Customer & Innovation Center) from ViscoTec.

The festivities on 22.09.2017 started with a champagne reception, followed by an exciting welcome by the two managing directors of ViscoTec, Georg Senftl and Martin Stadler. Ludwig Resch, shareholder of ViscoTec, also addressed some words about the 20-year history to the visitors. In addition to the employees and business partners, MdB Stephan Mayer and MdL Dr. Martin Huber were among the guests. The spiritual blessing was provided by the two pastors Albert E. Lang (catholic) and Johann-Albrecht Klüter (evangelical). A speech of a somewhat different kind was given by the motivational speaker Steffen Kirchner: He captivated the audience with his impulse lecture about „The joy of performance”. After the speeches, a delicious buffet was served to strengthen the guests for the rest of the evening. The visitors were then able to take a fresh look behind the scenes of the new CIC on guided tours. The evening was rounded off with the “ViscoDisco” with groovy music and lively bar. 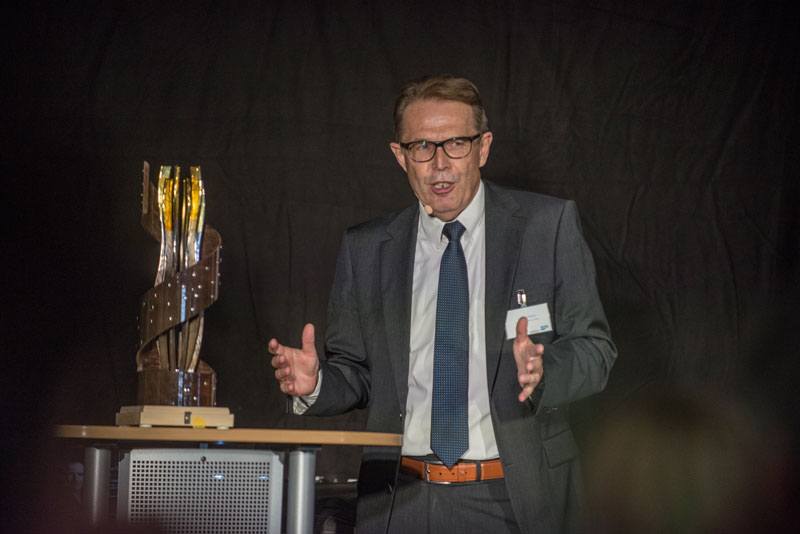 Shareholder Ludwig Resch at his speech.

ViscoTec developed from a department of Resch Maschinenbau GmbH in 1997. The company started out with 12 employees and just DM 3 million turnover in the first year. But already in 2007 ViscoTec was able to book the sale of the 20,000 pump for itself and in 2015 already that of the 30,000 pump! Over the years, the ViscoTec America Inc. in Georgia (2009), ViscoTec Asia Pte Ltd in Singapore (2011), ViscoTec Shanghai Ltd. in Shanghai (2013) and ViscoTec India Pvt. Ltd. (2017) was established. In addition, a worldwide dealer network was built up and thus the internationalization was pushed forward. But it was not always easy: ” Over the past few years, we have driven growth with great dedication. We have risked a lot and suffered a lot, sometimes swearing, sometimes even crying. But we have always made it.” says Georg Senftl, describing the development of ViscoTec in his speech on the company’s history. The dosing technology experts from Töging have gained a lot of experience over the last 20 years and have conquered countless markets. From food, cosmetics, pharmaceuticals and plastics to aerospace and automotive, medical technology and biotechnology – ViscoTec has made a name for itself in many industries with its dosing systems and dosing components and is constantly discovering new fields of business such as e-mobility and 3D printing. Few people know that, for example, half of all smartphones worldwide are produced and in the future many aircraft wings will be glued with ViscoTec technology.

Initially, around 50 dispensers could be produced per month. This number has increased considerably in recent years – to more than 20 times. The ViscoTec brand preeflow®, which ranks among the world market leaders in the field of microdosing from one µl upwards, contributed to this successful growth. „In the 20 years, we have always been guided by one principle: To act in the long term. This is reflected in our customer orientation and, for the most part, in our customer relationships and business partner relationships that have lasted for 20 years. I would like to thank all our customers and partners for this.” continued Georg Senftl in his speech. He also said „Thank you“ to all ViscoTec employees for their special commitment and inventiveness and stated amusedly, that working at ViscoTec can’t be so bad, with a fluctuation rate of less than 2 %. Nevertheless, he warned: “We must not rest on our laurels, a lot of work is waiting for us and we will continue to need many ideas, flexibility and versatility as well as a great deal of luck in order to continue our success story. I am looking forward to what the future holds for us at ViscoTec and for you, dear guests!“

The new CIC has a technical centre and engineering offices for every branch of industry that is supplied by ViscoTec, as well as a creative space for mechanical engineers, in which they can give free rein to their thoughts on new ideas and technologies in a pleasant atmosphere. In order to actively shape the future growth of ViscoTec.

Blue LED strips illuminate the way to the entrance of the CIC on the way there – matching the blue logo of the machine manufacturer. The impressive entrance hall invites you to marvel. Generous architecture and high quality materials reflect the character of the company: Best quality for perfect dosing technology and demanding dosing tasks. ViscoTec focuses on the complete problem solution for the applications of its customers who transport, dose or portion viscous or pasty materials in fully or semi-automatic processes. The dosing technology experts carry out tests and trials for customers – the new CIC offers optimum conditions and sufficient space for this. Customized systems are developed to customer specifications. Particularly for this service, but also for the training of customers and employees, there is now much more space available. Complex developments and dosage tests for different customers can be carried out and implemented in parallel. 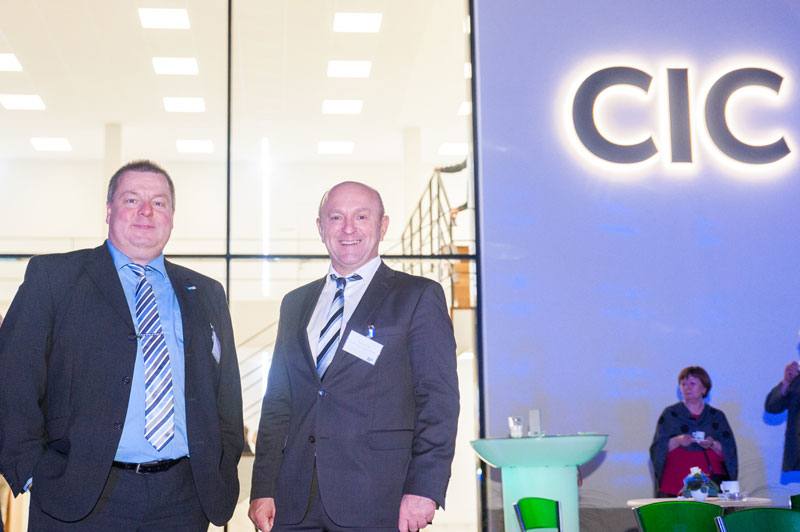 „The success of our customers is what makes ViscoTec so successful. Our team of currently around 165 employees works based on this philosophy.” says Martin Stadler, who accompanied the new building from the initial planning to completion. The goal of the team is to convince through individual consulting services. As a medium-sized family business with flat structures and short coordination channels, ViscoTec is much more agile than the major players on the market. And that gives the opportunity to take time for the customers’ needs – to be able to offer the optimum product solution in each case.

The world market for dosing systems and dosing components for viscous materials in industry still offers a lot of growth potential for ViscoTec. In the last five years, the company has more than doubled its turnover and the number of employees. Demand for these products remains high. In 2017, the 20th anniversary year, ViscoTec is expecting a significant increase again – of course perfectly dosed!