Sensors (from the Latin “Sensire”) are devices by means of which it is possible to detect physical or chemical properties of materials. As human beings, we are not able to perceive these properties accurately (e.g. pressure), without technical assistance, and therefore only estimate them. For this reason, measuring devices in the form of sensors, transform these properties into readable quantities which can be processed further.

Pressure sensors are measuring devices for recording pressure as a physical quantity. Such sensors can be found in various aspects of life, e.g. in microphones, height measuring devices, motors or as a trigger switch for airbags. Due to its unique geometry, the flowplus16 pressure sensor is specially designed for the detection of pressure in dosing technology. The flowplus16 pressure gauges are therefore the first element of a measuring chain that transforms the physical quantity of pressure (force per surface) into an electrical output as a measure of the pressure. The SI unit for pressure is Pascal (Pa). In addition to Pa, the bar (bar) is also approved in accordance with DIN 1301.

If the pressure is measured in liquids, it is found that the fluid cannot be compressed (or almost compressed) by mechanical stress. If, for example, a force is exerted on a liquid which is contained in a closed container, the volume of the liquid remains unchanged. However, a “counter-pressure” builds up inside the liquid, which compensates for the external force (see figure 1).

Figure 1: Pressure in liquids using the example of the piston pressure in a syringe (Source: http://grund-wissen.de/physik/mechanik/festkoerper-fluessigkeiten-gase/fluessigkeiten.html)

In a liquid or in a gas, the piston pressure always has the same effect in all directions (“Pascal’s principle”). If, for example, pressure is applied to the water, which is in a perforated tube or a so-called “pressure-propagation device”, the water escapes through all openings perpendicular to the surface, as shown in figure 2. 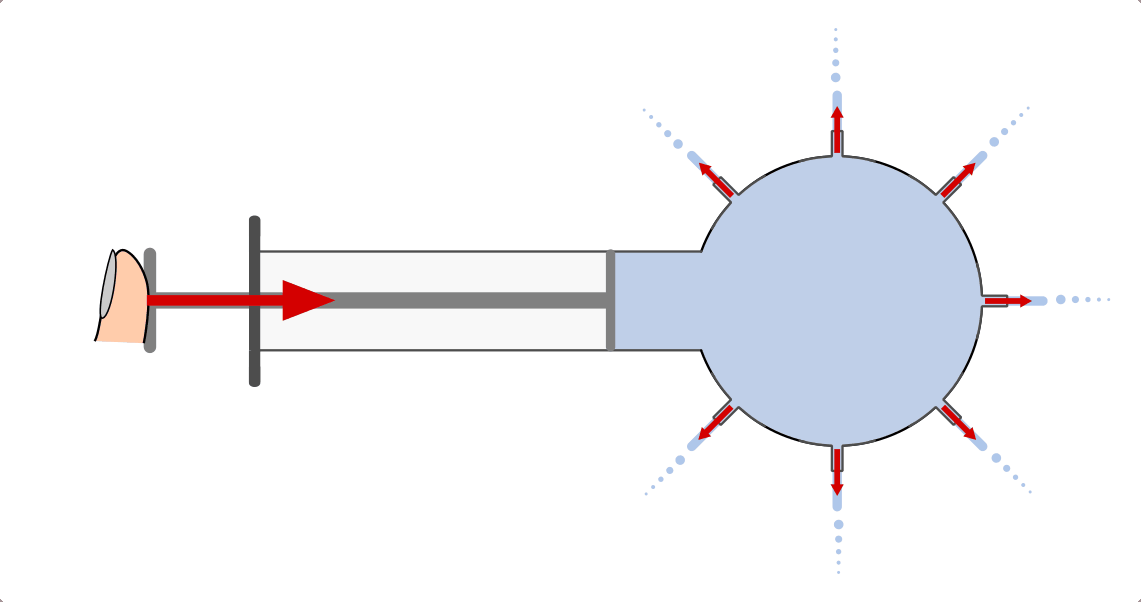 This physical principle allows the flowplus16 to measure the dosing pressure. In dosing technology, the dosing pressure is the decisive physical measure used to obtain information from the process. Therefore, the status of various conditions in the process can be determined by pressure changes. An accurate measurement of the pressure is therefore essential. In the case of dosing technology, this means that the entire dosing process is adversely affected by disturbance variables. Faulty dosages will affect the quality and the use of the material. Such faults can include, narrowing or clogging of the dosing needle, an incorrect distance to the substrate or trapped air in the form of micro-bubbles. Especially in the field of micro-dosing, the application of the material must be accurate and reproducible to a large extent. 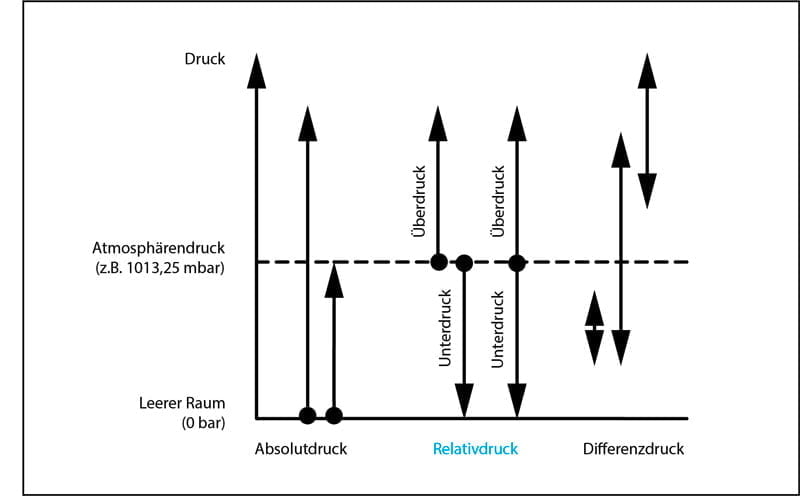 The flowplus16 pressure sensor belongs to the family of piezoresistive sensors. These measure the pressure by utilizing the piezoresistive effect. This effect is understood to mean the change in the resistance of a material under the influence of mechanical stress.

If pressure is exerted on an element, its cross-section and length change. By changing these parameters, the resistance of the element also changes. However, the deformation of the element does not yet describe the actual piezo effect. By this, it is understood that the crystal structure is so strongly influenced that the specific resistance of the element changes. This effect occurs with all elements, but is only distinctive enough in some semiconductors (Si, Ge) so that the effect is sufficiently strong to be measured. Therefore, pressure sensors or the pressure measuring membrane, as also found in flowplus16, consist of silicium. To measure the pressure, four resistors are applied to a thin silicium membrane and connected to a Wheatstone bridge. This membrane is located within a solid base, in which there is a constant comparative pressure. If the pressure changes outside, the membrane deforms, two resistors are compressed and two others are stretched (see figure 4).

The resistance change occurring as a result of the piezoresistive effect is proportional to the measured pressure. The use of the Wheatstone bridge is crucial since the materials used are highly temperature-dependent. Using only one resistor would result in the measuring result being inaccurate. The Wheatstone bridge only lets the differential voltage be measured, which remains the same regardless of the temperature, since the temperature effects all resistors equally. Two resistors are placed on the edge of the membrane and two in the center. 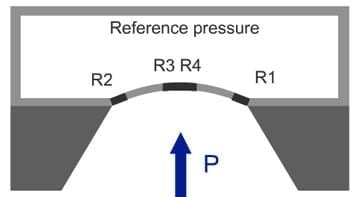 As a result, outgoing forces such as a fluid pressure or a gas pressure can be measured. Such pressure transducers are suitable for both static and dynamic applications. 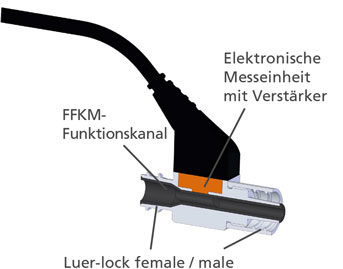 By means of an integrated circuit, a small sensor can be produced. In addition to the four bridge resistors, the chip contains the constant current source and the measuring amplifier. The dimensions of the pressure transducer are largely determined by the fact that the measuring cell must be protected from the material to be measured, and therefore for many applications a housing is installed. With its individual geometry of its flow-through functional channel and integrated pressure evaluation electronics, the flowplus16 is a self-contained component with minimal dimensions (see figures 5 and 6). 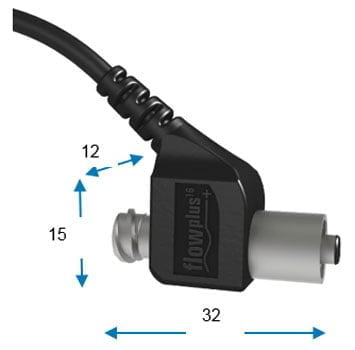 Figure 6: Dimensions of the flowplus16

The active sensor flowplus16 provides its information as a load. Only in a few cases can a signal of this kind span a larger distance without interference. The sensor is therefore combined with an electronic circuit that provides standardized signals. Furthermore, an additional linearization of the signal takes place. 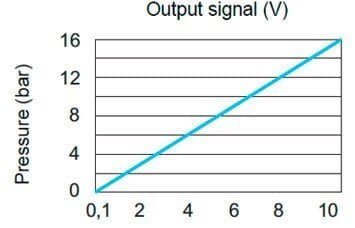 Tensions can easily be stabilized so that they are largely independent of the load. The disadvantage of a voltage drop on the lines during signal transmission is compensated by means of an integrated signal amplifier. For example, the recorded values measured, which can be obtained with a sampling rate of 3 kHz, can be transmitted up to 25 meters without problem and without any loss in quality. This electronic preparation of the signals is called signal conditioning.

The flowplus16 pressure sensor is equipped with a Luer-Lock connection for easy integration into existing processes and for fast implementation into existing systems. The Luer system is originally a standardized connection system for the combined use of syringes and infusion apparatus from the medical field. There is practically only one size for this connection system. The seal is achieved by a conical construction of the connecting parts, the so-called Luer cone, which consists of a 6% (Luer) taper. In this way, the inner cone of one connecting side is referred to as “female”, the outer cone of the opposite side is referred to as “male”. If, as in the case of the flowplus16 pressure sensor, the male cone is provided with an internal thread for locking, the connection can be secured therefore avoiding accidental loosening. This opens and closes with a half turn. The Luer system has not only established itself as a standard in medical technology, but also proved successful in small and in micro dosing technology. Numerous dosing needles in various forms can be attached to the dosing system and/or the pressure sensor, which can be just as easily removed, as and when required.

The function channel is a special feature of the flowplus16 pressure sensor. The dead-space-free fluid channel, including the integrated diaphragm seal, is made from a fully fluorinated elastomer. This material, known under the name of VisChem, is used especially where very good chemical resistance is required. Using special, completely hydrogen-free monomers and corresponding compounding and processing techniques, materials with rubber-elastic properties can be produced. These come very close to polytetrafluoroethylene (PTFE) in their material and thermal resistance. Due to its comparatively high raw material cost, its general use is restricted to applications in which it is in contact with very aggressive materials. The application is also particularly applicable in areas where high safety or cleanliness requirements exist or where possible high incident costs justify its use. This may be the case, for example, in the chemical industry, in the semiconductor industry, in the food industry or in the aerospace industry. In these areas, certain processes can only be achieved by using this high-quality elastomer.

For example, the flowplus16 pressure sensor is particularly suitable for the processing of anaerobic adhesives, which harden on contact with metal ions and therefore solidify completely in next to no time.

In general, VisChem is among the most resistant elastomers against aggressive materials, which is noted in corresponding lists of compatibility. Such a list for various elastomeric qualities would include a chemical resistance assessment compared to various operating materials. This information is based on tests and information provided by suppliers and users. Due to the different operating conditions and the composition of the materials, these data are only to be regarded as guideline values. They are not binding and must be checked on a case-by-case basis.

This sensor takes away the quality controller’s pressure!
flowplus® is a brand name powered by ViscoTec Pumpen- u. Dosiertechnik GmbH. flowplus® ensures optimal security of your processes – together with the evaluation unit flowscreen®. The various fields of application include, among others, automotive, electrical and electronics industry, medical technology, aerospace, renewable energies, electrical and hybrid technology and measurement and sensor technology. flowplus® can be easily integrated due to standardized interfaces.