The dispensing and application of sealant and sealing compounds in conventional aircraft construction is a complex process that can be significantly improved in many ways. In the  construction of aircraft in the early 20th century, seals in aircraft tanks or fuel lines, for example, were usually rubber sheets cut into shape. The introduction and development of aliphatic polysulfides by the Thiokol Chemical Corp. in 1928 laid the foundation for subsequent optimization. This material was first used in an aircraft tank from the US Air Force in 1941. The two-component sealants – often polysulfides with special properties such as low density, chemical resistance and fillers – opened up the possibility of designing complex track geometries whilst meeting the high demands of aircraft manufacturers.

Today there are a multitude of different sealing applications: Edge Sealing, Fillet Sealing, Cap Sealing or Interface Sealing for example. What applies in most cases, and is often seen in practice, is the following scenario: The operator with knowledge of the application uses the sealing material for the manual activity of sealing either premixed-frozen or 2-component cartridges. Standard 2-component cartridges (injection barrier cartridges) contain a pre-filled amount of resin and hardener. The mixing process causes resin and hardener to react in the cartridge and subsequently results in a total volume of the cartridge, e.g. 55 ml, 180 ml etc.

In many cases, however, this quantity is not sufficient. It is therefore not uncommon for half-full cartridges to be thrown away and the already cured material disposed of. The operator takes a new cartridge, the pot life starts again and before the material is used up, another cartridge is disposed of.

This process is easy to formulate:

With a 180 ml cartridge, a pot life of 2 hours and an operator output of 42.5 ml/h, this results in a 95 ml material waste. In this case it equates to 52 %. The value, only shown here as an example, gives a very realistic picture from practice. In simple language, this means that every millilitre of material is actually twice as expensive.

The good news is that this situation also offers a great deal of potential for reducing costs by saving on material waste.

With the help of ViscoTec’s automated solution, the two materials to be dosed can be purchased separately in larger containers and mixed as required. Two emptying systems remove component A and component B from these large containers. The 2-component dispenser vipro-DUOMIX mixes the two materials and doses an individually adjusted quantity into the cartridge. It ensures that only the amount of material needed at any one time is mixed and filled in. 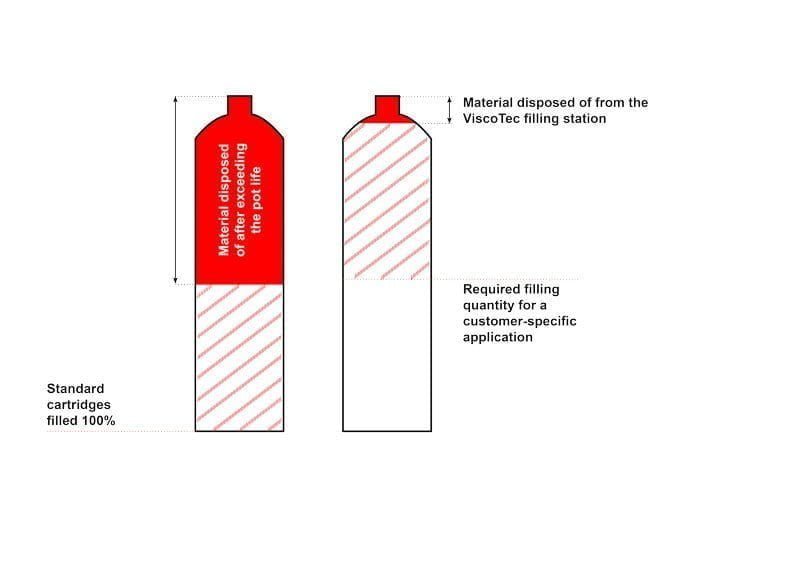 Without changing the actual application technique (still carried out manually), the material can be individually mixed and dosed by means of a filling station. This not only reduces material waste but does so to a minimum. Purchasing conditions are also significantly improved through material procurement via large containers (e.g. 20 litre pail). In addition, both the logistical effort and the environmental impact are reduced. Simply put: More benefits and less effort without changing the overall process. 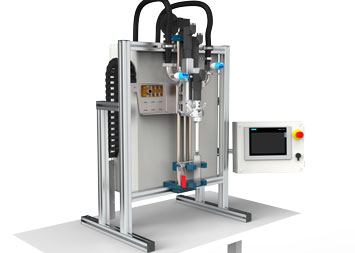 An example of a ViscoTec filling station

ViscoTec filling stations are always customized to the material to be dosed. High precision and gentle material dispensing are the key to meeting the high requirements of the aerospace industry and the specifications associated with it. Relevant tests and practical reports have proven this many times. There is no doubt that filling stations can also be used for materials other than those used for sealing.

Automation of a sealing process must always be considered and evaluated on a case-by-case basis. In most cases, however, automation can save you plenty of money. By a comparably small change to the process.

It is time for a change, if it is profitable to do so.