The ViscoTec Pumpen- u. Dosiertechnik GmbH has extended its portfolio of 2-component dosing systems for additional user benefits and presents the newly developed product series ViscoDuo- VM. The focus of improvement with this new system generation lies on reduced maintenance time, lower spare part costs and spare parts inventory and a higher flexibility in the use of different types of static mixers.

The valveless 2-component dispenser generation ViscoDuo-VM continues to be based on the proven progressive cavity technology with its volumetrically extremely precise dosing principle for highly accurate dosing applications. The dosing accuracies can be achieved repeatable even over a wide range of low to high viscosity media as well as for media with high filling rates. The performance characteristics of the ViscoTec systems remain also in the processing of 2-component media of different viscosity and simultaneous application of widely differing mixing ratios.

With the series ViscoDuo-VM users get access to a newly developed modular component structure with the possibility of 2-component dosing system-configuration, maintenance and parts replacement at module level. The mixing head is made up of split mixing head segments, which are assembled to a 2-component dosing unit with a newly developed mounting kit. Both, cleaning as well as system maintenance can be performed per segment from now on. It is no longer required to disassemble and reinstall the complete dosing unit at a production line. Also the range of spare part exchange and the necessary volume of spare parts inventory are reduced. Was it previously necessary to replace the entire mixing head, the new principle allows the exchange of individual segments as well. Additionally, the mixer connection unit is included as a separate component and can be exchanged individually. The use of different types of mixer requires only the replacement of the mixer connection unit, but not the entire mixing head. Even pipe diameters before the static mixer can be adapted e.g. to low viscosity liquids by dedicated connection units. Mixer connection units are subject to particularly high cleaning requirements and as a result to increased wear. Cost savings are achieved for users with low replacement costs or with the availability of wear-resistant version of this module for example in stainless steel materials. An additional system modification considers the redesign of the connection principle of the dispensers to the mixing head unit. The connection is realized by a simple connection sleeve for the accurate and tension-free assembly process. The design minimizes dead space and provides a maximum of process accuracy for users. The components to be mixed are dosed purely volumetrically and directly from the dispenser via the mixing head into the static mixing tube. The mixing of media components is carried out downstream of the mixing head in the mixing tube only. Thus, the risk of material curing in the mixing head is eliminated. The dispensers are based on the ViscoTec RD -EC type with the performance features for easy cleaning (easy clean) and enhanced access to the pump interior.

The standard scope of delivery of the mixing head segments includes built-in dosing pressure sensors for on-line process monitoring. The system control of the ViscoTec 2-components dosing systems is carried out by the approved dosing control unit ViscoDos -4000-2K Touch. The control unit provides a wide range of functionality for the setting of process parameters including the mixing ratio, dosing rate and dosing volume as well as a programmable suck-back option. 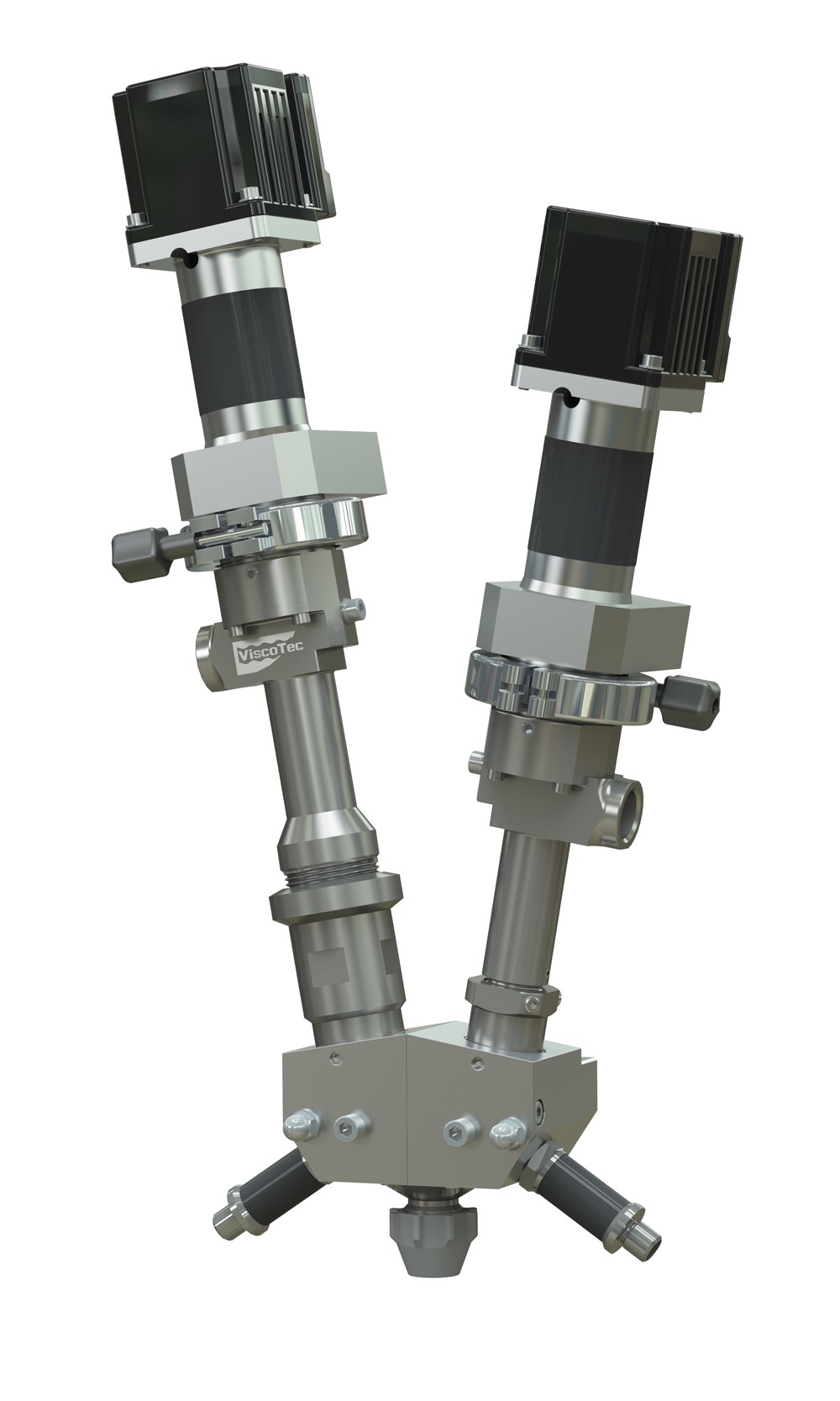