Clean Potting is the Key – Manual and Serial

Performance is not always the only focus in production – it is not uncommon for more flexibility to be added. The machine manufacturer Fichter-Maschinen, for example, was looking for a one component and two component dosing solution for a newly developed application with which, for example, potting compounds can be dispensed both manually and automatically.

Such machines are used for the potting of electronic components, for example, which are assembled from a large number of small components and then potted or encapsulated to protect them against external influences. The solution designed by Fichter-Maschinen is particularly interesting for companies that want to pot more flexibly, but not necessarily faster, as Martin Baumann from Fichter-Maschinen points out.

As the engineer explains, this occurs, for example, with manufacturers with the need to be able to switch between serial and manual operation for prototype production on a system. A ViscoTec ViscoDUO-VM mixing system and a so-called manual manipulator are central to the system, now built by Fichter-Maschinen. The ViscoTec potting head, which is fitted on this manipulator, precisely dispenses and mixes the two components of a standard two component casting compound. In addition, buffer tanks and a material degassing system for both components can be installed in order to achieve an optional degassing compound for bubble-free potting. Further accessories, such as air-drying units or inert gas loading and, if necessary, a circulation line for returning the material to the stirring vessel to avoid sedimentation of the fillers in the system, are also available. 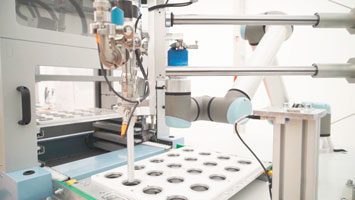 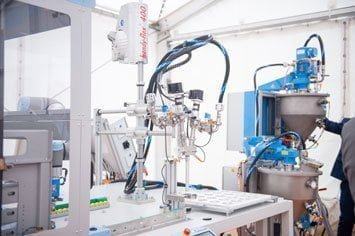 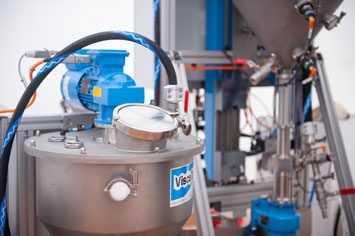 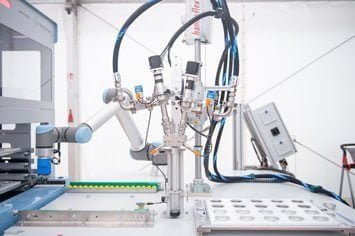 Manual work does not have to be exhausting

The force of the weight on the manipulator is balanced by a rope pull balancer – so that an operator can position the mixing system in any axis with minimal effort and pot the desired electronic components. The automated version uses a collaborating 6-axis robot and a pallet storage system. In a first process step, the robot retrieves a pallet from the storage. In the second process step, the robot picks up the ViscoTec potting head and then moves along the grid until the pre-programmed number of components to be potted has been processed. Once this is completed, the robot pushes the processed pallet back into the storage and then retrieves the next pallet from the storage and the process restarts.

When asked about his decision to opt for a ViscoTec dispensing and mixing system, Baumann looks back on his 15 years of experience in the field of encapsulation and bonding. He first came into contact with ViscoTec during the course of his research. He was impressed by the principle of the progressive cavity pump for technical implementation in dispensing and potting applications. ViscoTec’s technology offers a further advantage in addition to clean material breakage: The compact design of the mixing system allows it to be attached directly to the potting head – in such systems, this saves a lot of valves and pipes and therefore makes automation much easier. The volumetric dispensing systems are pulsation-free and repeatable. The adjustable suck-back ensures that the material is broken off – dripping or even accumulation of product can be avoided reliably. The ViscoTec mixing system has been specially designed to meet the requirements of Fichter-Maschinen. In addition to various casting compounds (polyurethanes, silicones, epoxies), it can also be used for moisture-sensitive or light-sensitive materials that can be cured with additional UV lamps. ViscoTec is also known for its ability to process different viscosities with widely spread mixing ratios and underlines the flexibility demanded by Fichter-Maschinen.

You can find more information about ViscoTec dosing and mixing systems here.

Would you like to know more about this topic?